I eat chicken ... just not mine


Several years ago, I decided it would be fun to get baby chicks in the spring for the boys and me to raise to live in the back yard.  Growing up on 4 acres in the country did not do my current suburb neighbors any favors.  I have had a little bit of everything.  We absolutely loved our little Silkie chicks!  They were sweet, funny, and so friendly! 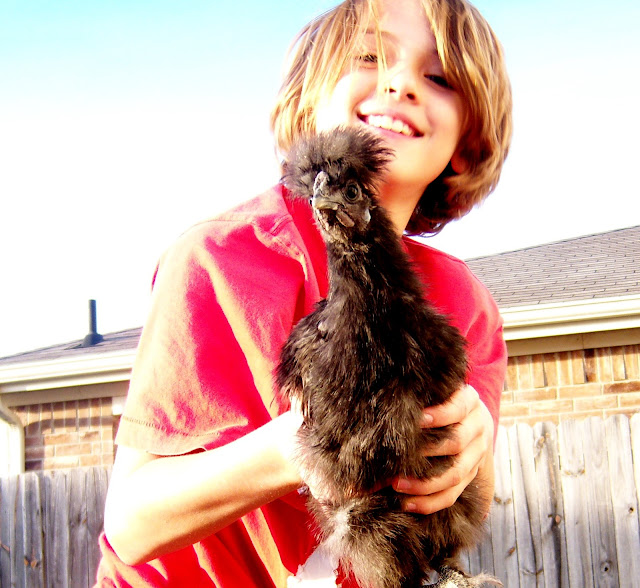 While so much fun, we ended up with only 2 fluffy chickens left thanks to not knowing nearly enough about predator proofing.  One fateful morning, both of those sweet little fluffy butts started to crow.  I will subject my neighbors to a lot of things, but a crowing rooster is not one of them.  After a lot of fun and experience, we had to let the little guys go to live on a real farm in the country where they would be appreciated.  Since that day, I have wanted to try again to have a back yard flock, but simply have not had the time to provide the kind of home they really needed… Until now!

Fast forward 8 years, and it was time.  The boys claimed they wanted nothing to do with having chickens again.  Ok – noted.  While waiting for the shipment of my little fluff balls, I just could not stand it.  I popped by Tractor Supply to get supplies, and ended up with 7 Bantam babies to test out our set up.  HA!  I ran inside with the box and started putting the feeder and waterer together.  Instantly the boys were curious about that box.  I finally told them they could look inside – they weren’t interested, remember?  Well, that was is.  One peek at those little guys, and my big guys were hooked.  We were all in. 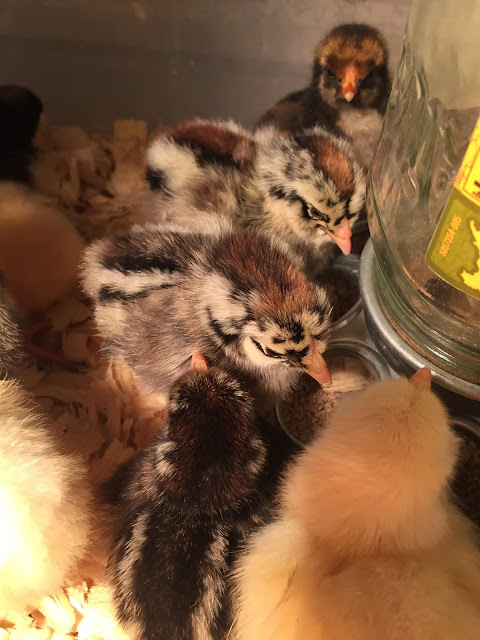 As I continued to add to my flock and subtract from it, I quickly realized the little brooder boxes we had were not going to be enough and upgraded to a grow-out pen.  It would only be temporary.  I was going to get this coop built in no time! I am delusional. We needed a whole different kind of Neagle's Nest!

Thanks to knowing some amazing people, most of the materials to build my coop were recycled and free.  I had finally picked out a design to get me started, but I was building this as I went.  Who needs plans, right?  I come from handy stock!  I started with an old exterior sign face to use as the floor.  That determined my size for me.  I picked up concrete pier blocks and got started.  We arranged the blocks, placed the studs to hold the floor, and screwed them together.  Easy peasy.  I really thought this was an indicator on how fast this booger was going to come together. 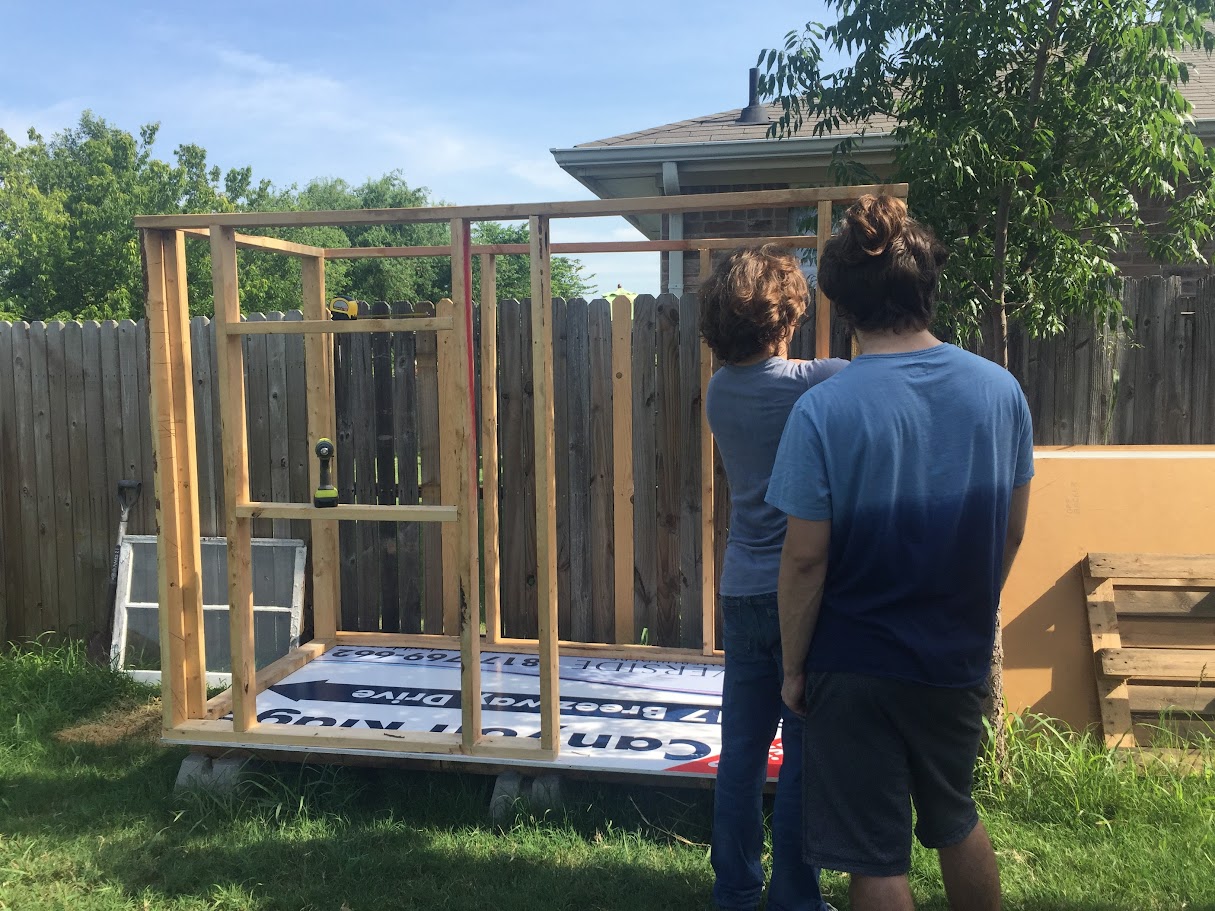 Once the wall frames were up, we had to figure out the best way to skin it with the outdoor panels I acquired.  Yes kids, I actually used math and geometry after I got out of school.  I know you don't think you will, but be prepared.  Figuring out how to make the materials I had on hand work in a way that you have almost no waste is no joke.  It took some serious planning.  It's a good thing I had time to do that since it rained at least once every weekend I planned to work on it!  I had to get these babies out of the house.  This looks like a cute idea, but wow were we ready to get them outside. 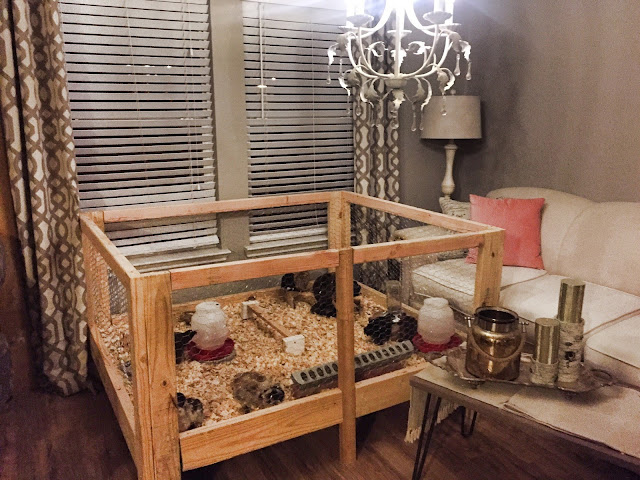 Finally we had what looked almost like a real shed!  Yes, my helpers refuse to wear shoes when working on anything.  There is nothing I can do to make them hear reason, so barefoot we are. 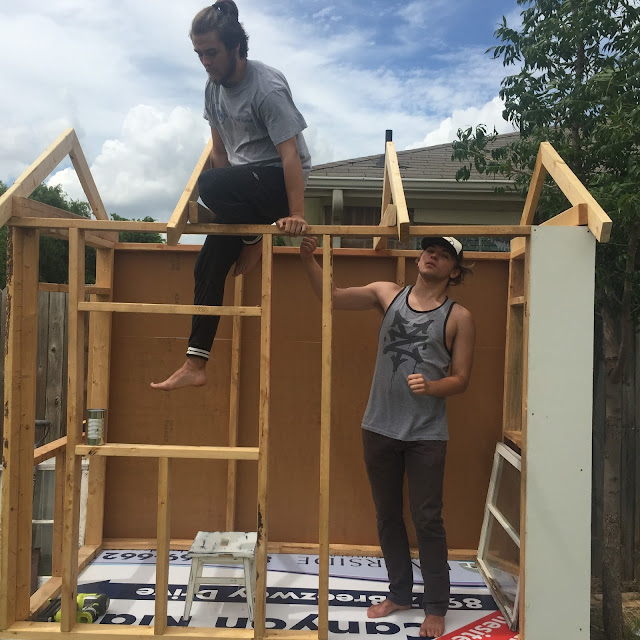 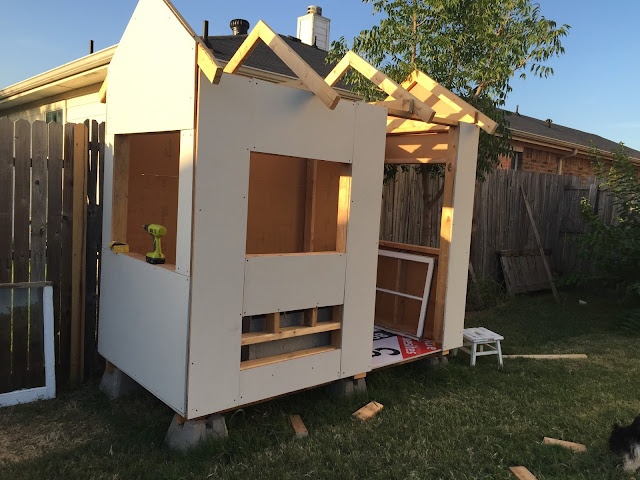 Now, I had to make the difficult decision of how I was going to build the roof.  After deciding which direction I wanted the trusses to run, I built them.  After building all of the trusses, we installed them to the top of the walls.  Again, not that difficult.  Don’t be fooled!  When we put the pre-cut roof decking up, we were mortified to find that they were NOT level at all.  After taking them down a dozen times, I decided to just build the roof on the patio, and then get my big strong guys to hoist them up with me.  This worked FAMOUSLY!  Finally, we had a roof!!! 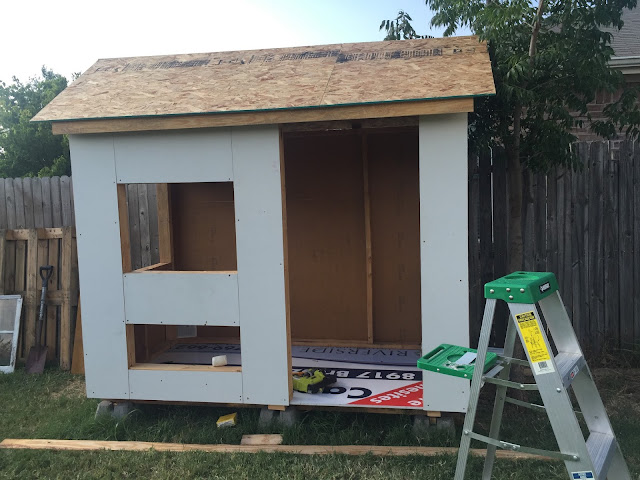 Rather than purchase shingles from the big box, I decided to stay frugal.  I posted an ad on a local Facebook group and had one box donated, and another offered for $10.  SOLD.  I bit the bullet and purchased the felt underlayment after waiting several days with nobody wanting to get rid of any left overs.  I went big and got the “expensive stuff” because technically it was the same price as the other, but just had less on the roll.  I still didn’t even use half of it even with a wind storm that ripped it off once.  The boys stepped up big time here.  I have a terrible fear of heights after having to help my daddy roof our home more than once.  I also think getting older and having a good fear of my mortality keeps me on the ground.  Teenage boys are fearless, and they ROCKED at roofing that coop.  I could not have been more pleased with them.  I could have done without the bickering, but I guess when you have a duplicate person that you are with all the time, you are going to bicker.  There were no serious wounds other than Xander whacking his thumb with a hammer – twice.  I think he will live.  While they were roofing, I got to work trimming that baby out.  I wanted it to have a cottage vibe, so I did vertical trim. 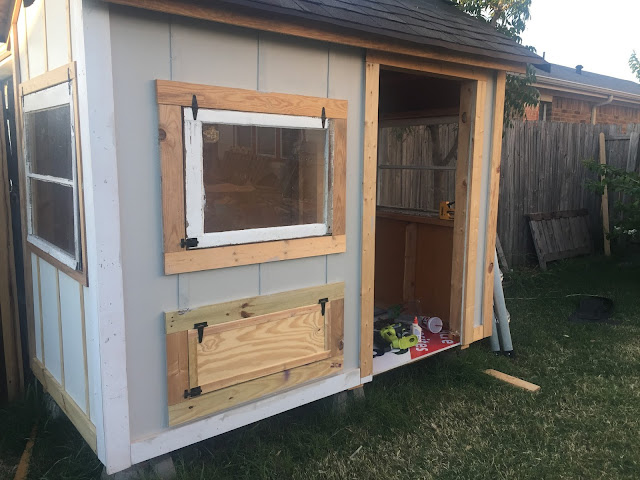 Xander, who has an opinion about everything, did not like my idea of a white coop.  He wanted color. Ok. I decided maybe he had a point and opted for a perfect greige with white trim, and a mustard yellow door.  When showing him my mock up, I was told he didn’t like the yellow.  WHAT??  You said it needed color!  “Just not that color”, I was told.  Well, tough.  Yellow makes me happy and it’s already in the back of the Jeep. I got to work on building a barn door to install.  I built it out of 1x4 boards, wood glue, and my handy AirStrike Brad Nailer.  That tool is probably my favorite thing of all time right now.  A nail gun that doesn’t require dragging an air compressor around – yes, please.  Anyway, the door was finished and the boys were impressed.  It always makes me feel good when I shock them.  After it was installed, the rooster sign was hung, and we were almost in the chicken business! 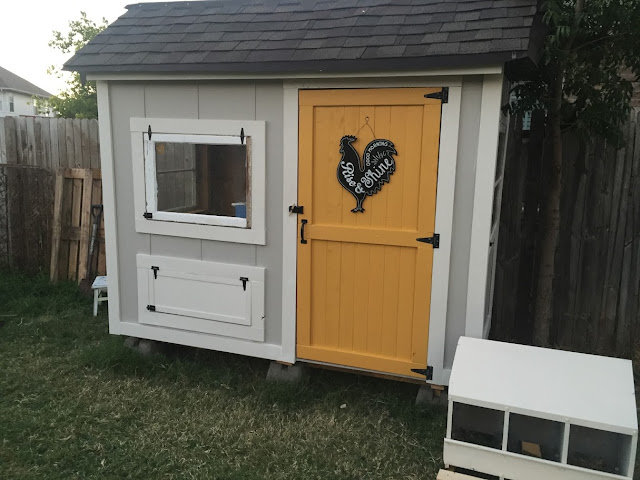 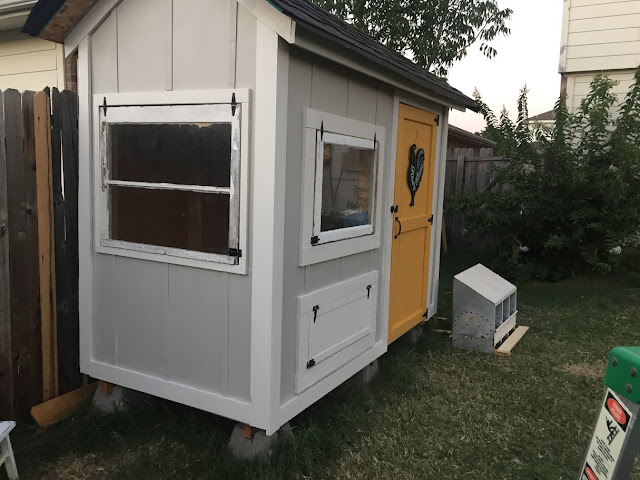 We decided that since it’s so hot here right now, any kind of window would hinder the air flow, so the vintage windows were taken out and stored until we get a break in the weather.  I think it still looks adorable though! The vintage metal nesting box was hung inside and roosting bars installed.  We were ready to move the girls in.  It has only taken them about 4 days to start going inside on their own when the sun starts to set.  Someday soon we will build the attached deck and the covered run to keep them a little safer when we are not home, but until then they get free run of the yard.  The boys who are tired of the land mines, might be ready to help sooner than they thought! 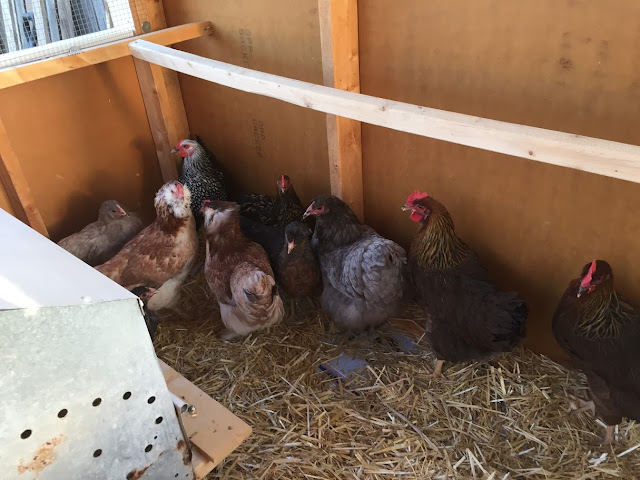 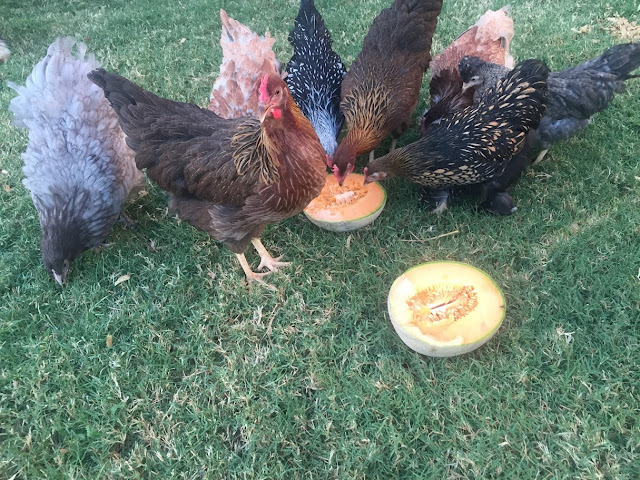 I have a feeling this will be one of those projects that I will continue to work on, but for now, I just love it!  I think they do too.  Yes, it’s a bit more than anyone expected, and I almost died of heat stroke at least twice, but I love my birds.  Perhaps, someday, we will even get eggs.  Until then, what is better than a pet that lays breakfast? 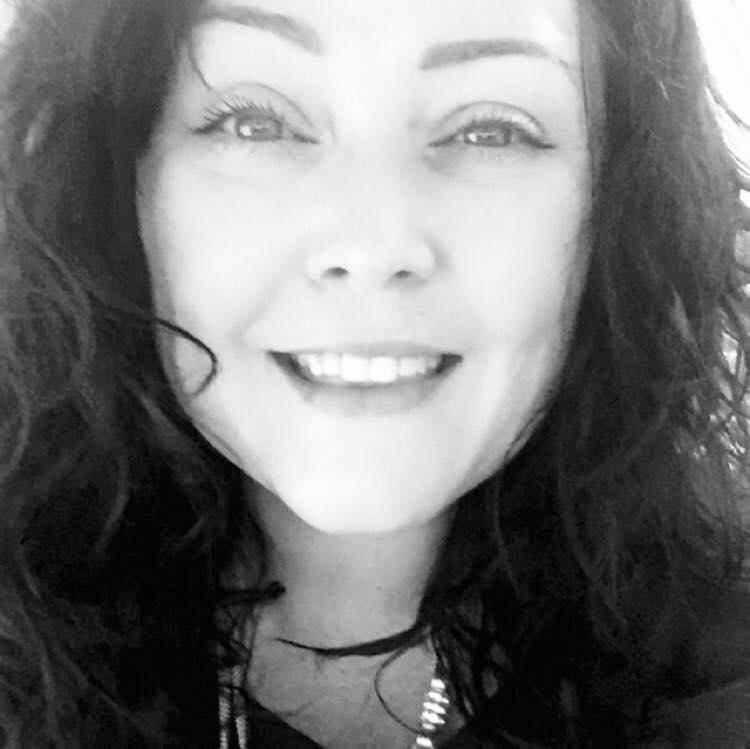